Welcome! This is still a work in progress as I continue to upload new photos to the site and add additional species on a regular basis. I hope you enjoy the photos I have posted so far. Feel free to visit as often as you like. At the moment the site includes folders for each of the endemic birds of Puerto Rico, many other bird species and some of the marine life I have photographed around the island. While this web site is mostly a collection of pictures taken in Puerto Rico, it is not limited to the island. I have also included some photos taken during trips to my native state of Rhode Island, along with Canada, Califronia and a few other places.

Since many people doing research and/or conservation work have asked me to send them examples of not just the best or most artistic photos, but those that could be used for ID purposes and/or behaviors that they could use in their work or studies, I found this site is the easiest way to provide examples of those photos to those interested. Photos are presented from the most recent to the oldest. I have found that everyone has there own personal preferences and needs. Many of the photos that I considered deleting are often the ones requested. Eventually I hope to have sample folders of just the "best" for easier viewing.

The wonderful thing about nature photography is you never know what you are going to come across on any particular day. The number of subjects to photograph is endless. What makes it even more interesting and challenging is you can make plans and prepare to photograph something in particular, but there are no guarantees you will find what you are looking for. Even if you do, the subjects, mostly animals in there natural habitat, are unlikely to cooperate the way you want them to, the lighting is probably all wrong or you will come across something unexpected that will divert your attention. It is very rewarding to get that special moment in time, a fraction of a second that you can share with others. While my photographs are mainly of birds, whales, dolphins and just recently, some of the underwater marine life found in the western half of the island of Puerto Rico, I am an opportunistic photographer, taking photos of just about anything that catches my eye. Hopefully there are some images here that will catch your eye too!

My interest in photography began while I was a teenager in the early 1970's when I purchased my first manual film camera, a Pentax K1000. While I've always had an interest in taking pictures, my true passion for photography did not really take hold until the mid 1990's when I acquired a small boat. I took out my old Pentax camera that I had put away, attached an inexpensive Vivitar zoom lens and began taking photos of whales and dolphins off the west coast of Puerto Rico. In 2005 I became interested in bird photography after taking a walk in the Sierra Bermeja Hills of Cabo Rojo Puerto Rico. It was then that I came across the small and colorful Puerto Rican Tody. It was this little bird that got me hooked! My first bird photography camera was a digital Panasonic DMC-FZ10 and after about 18 months I acquired my first DSLR, a Nikon D50 with a Sigma 100-300mm lens, which is what I used for the next 2 years. I then acquired a Nikon D-300 and obtained a Sigma 150-500mm lens. Just recently I added a Nikon D7000 & D7100 as a backups to the D300 and a Sigma 50-500mm OS lens, which is what I am currently using. Until the end of 2010 my picture taking was limited to weekends when I would go for walks with my family in the forests and coastline of Southwest Puerto Rico or when we went out looking for whales and dolphins in our small 20 foot boat. Since retiring in January of 2011, after 32 years of public service, I have had even more opportunities to obtain some special moments to share with you.

Many of my photographs have been published in books and magazines including: Puerto Rico's Birds in Photographs - Third Edition; Nightjars of the World; Species on the Edge of Survival; Rare Birds Yearbook for 2008 & 2009; The World's Rarest Birds; Bird Life International's Important Bird Areas Americas- Puerto Rico & US Unincorporated Territories; Zing Magazine for Liat Airlines in the Caribbean; Motivos Magazine - bilingual magazine for high school students; Birder's World Magazine photo gallery. One of my photos of the endangered Puerto Rican Nightjar won third prize in an international competition sponsored by Bird Life International for the rarest birds in the world. My photos were also used in a weekly newspaper series on the endemic birds of Puerto Rico published in El Nuevo Dia. Many of my photos have been used by university graduate students to help illustrate their master's and doctorate thesis; have appeared in several articles and reference pages on the www.neotropical.birds.cornell.edu web page; at the www.arkive.org - images of life on earth web page; at www.iucnredlist.org list of critically endangerd species; at www.audubonmagazine.org ; US Fish & Wildlife's endangered species page at www.digitalmedia.fws.gov & www.flickr.com/photos/usfwssoutheast. They have also been used by the US Fish & Wildlife Service, National Park Service and the PR Natural Resources for educational purposes, park signs, posters and displays. I have provided numerous photos to professors and teachers to be used in their classrooms and for several scientific research papers and presentations including those for several endangered species including the Puerto Rican Nightjar, the Puerto Rican sub-species of Sharp-shinned Hawk, Masked Duck and West Indies Whistling Duck.

For 3 years until 2015 I was a volunteer at the Marine & Coastal Ecology Research Center in western Puerto Rico as a spotter/photographer for a Humpback Whale research project, taking thousands of photos for identification purposes along with obtaining hours of whale song recordings with my hydrophones.  For the last few years I have been a volunteer providing services at the U.S. Fish & Wildlife Services Cabo Rojo and Laguna Cartagena Refuges, including all the field work in a study on the resident American Kestrels at the refuge.  It includes monitoring of nest boxes I built and installed, along with photographing nestlings & fledglings in order to prepare a timeline guide book.  I am also conducting road surveys to help determine population densities in the area.  In addition, I am a volunteer for the Puerto Rican Conservation Trust in their program to re-introduce the endangered Puerto Rican Crested Toad to the Cueva del Convento area in Guayanilla and a volunteer at Vida Marina - University of Puerto Rico Aguadilla, monitoring sea turtle nests along the beaches of western Puerto Rico.

If you wish to use any of my photos for educational and/or conservation purposes please contact me at the link provided to the right. 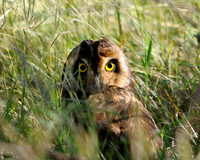 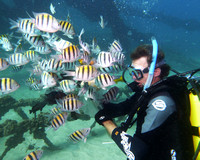 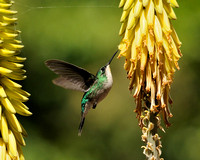 My dad Frank was the Diving Officer for PRINUL. Enjoyed the trip down memory lane.

Exitos!!
Luz
Marie(non-registered)
Hey Mike . Truly enjoyed your photos. Great meeting you and family at the guaniquilla walk. Give us a heads up when migrating birds are around. Would be such a treat. Thanks. Marie
Alejandro Sepúlveda(non-registered)
Nice work!!!
The guestbook is empty.
Loading...
© Mike Morel Photography
Available Feeds
RSS | Atom
Recently Added
RSS | Atom
Featured Items
Close
Powered by ZENFOLIO User Agreement
Cancel
Continue